Global diffusion of frames
I am currently leading a multinational research project, Frames in Production: Actors, Networks, Diffusion (FRAMENET). The project started in April 2021 and is funded by the Open Research Area (ESRC, DFG and SSHRC, with an overall budget of £1 million). FRAMENET brings together scholars from Warwick, Essex (Prof Leifeld) and Aston (Dr Oge) from the UK, University of Dresden (Prof Holzscheiter) from Germany and Université Laval (Prof Morin and Dr Dufresne) from Canada. Partnered by the German Development Institute, we aim to create a new, comparative research agenda that investigates when and how specific statements emerge in a political debate, by which kinds of actors they are proposed, and whether and how they diffuse to others. Our project studies frames in five issue areas (trade, immigration, environment, global health, and transparency), with two carefully selected political debates in each of these issue areas. Our study will rely on Discourse Network Analysis (studying the content of arguments together with the networks of actors) and interviews to study these exciting research questions.

Democratic deliberation and resistance
I am also a Co-Investigator of the RED-SPINEL project, ‘Respond to Emerging Dissensus: SuPranational Instruments and Norms of European democracy’. This project is funded by Horizon Europe and is led by Université Libre de Bruxelles. It started in October 2022 and is a €3.2 million, interdisciplinary, international and intersectoral project involving seven universities and four non-academic partners across Europe. George Christou and I are leading a work package on ‘Capacity-building, promoting democratic deliberation and problem-solving’, which will develop a set of original training sessions and toolkits aimed at supporting European citizens and policymakers.

Referendums and public opinion
My research has studied framing processes in referendums on European Union by using comparative designs. This body of work led to a unique dataset consisting of over 160 interviews with campaign elites (extensive field research on 14 referendums in 7 countries) as well as archival, media content and public opinion data.

My most recent book, Framing Risky Choices is co-authored with Richard Nadeau (UdeM) 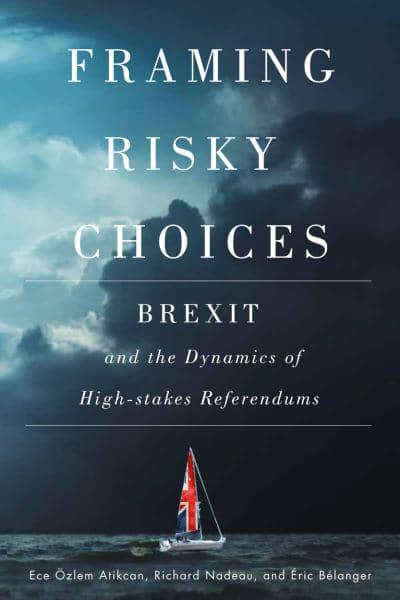 and Éric Bélanger (McGill). The majority of policymakers, academics, and members of the general public expected British citizens to vote to remain in the EU in the 2016 referendum. This perception was based on the well-established idea that voters don’t like uncertainty. So why did the British public vote to take such a major economic risk? This book addresses this question comparatively, by placing the Brexit vote in the bigger picture of EU and Scottish independence referendums. Drawing from extensive interviews and survey data, it asserts that the framing effect – mobilising voters by encouraging them to think along particular lines – matters, but not every argument is equally effective. Simple, evocative, and emotionally compelling frames that offer negativity are especially effective in changing people’s minds. Uncovering the core mechanism behind post-truth politics, it shows that the strength of an argument is not its empirical validity but its public appeal.

My earlier book with CUP, Framing the European Union, demonstrates how political language affects public opinion toward European integration. It examines six EU referendum votes: Spain, France, the Netherlands and Luxembourg on the European Constitution (2005); and Ireland on the Lisbon Treaty (2008-2009). While the referendums in Spain and Luxembourg approved the European Constitution, the ones in France and the Netherlands rejected it. Most intriguingly, the Irish public first rejected but then approved the Lisbon Treaty. In all six instances, polls show that the voting publics favoured the referendum proposals before the referendum campaigns began. However, this initially positive public opinion melted away in some cases. Why did this occur in some referendum votes but not in others? This book reveals that the key to the puzzle lies in political campaigns.

My EJPR article investigates the asymmetrical political advantage in EU referendum campaigns. The broader literature on referendums and public opinion suggest that in a referendum, the ‘No’ side typically has the advantage since it can boost the public’s fears by linking the proposal to unpopular issues. This article studies whether the anti-EU treaty campaigns have more advantage than the pro-EU treaty campaigns. Additionally, my article that appeared in JCMS focuses on campaign strategies in ‘double referendums’, where voters are asked to vote twice on the same issue in a single year, and they initially reject the proposal but then vote to approve it the second time. I am also fascinated by diffusion processes across EU referendums. My article in JEI focuses on the problem of cross-case influences and applies diffusion theories to the study of referendum campaigns.